In Chapter 16 we made hotspot maps to show which areas in San Francisco had the most suicides. We made the maps in a number of ways and consistently found that suicides were most prevalent in northeast San Francisco. In this chapter we will make choropleth maps, which are shaded maps where each “unit” is some known geographic area, such as a state or neighborhood. Think of election maps where states are colored blue when a Democratic candidate wins that state and red when a Republican candidate wins. These are choropleth maps - each state is colored to indicate something. In this chapter we will continue to work on the suicide data and make choropleth maps shaded by the number of suicides in each neighborhood (we will define this later in the chapter) in the city.

Since we will be working more on the suicide data from San Francisco, let’s read it in now.

The package that we will use to handle geographic data and do most of the work in this chapter is sf. sf is a sophisticated package and does far more than what we will cover in this chapter. For more information about the package’s features please see the website for it here.

For this chapter we will need to read in a shapefile that depicts the boundaries of each neighborhood in San Francisco. A shapefile is similar to a data.frame but has information on how to draw a geographic boundary such as a state. The way sf reads in the shapefiles is through the st_read() function. Our input inside the () is a string with the name of the “.shp” file we want to read in (since we are telling R to read a file on the computer rather than an object that exists, it needs to be in quotes). This shapefile contains neighborhoods in San Francisco so we’ll call the object sf_neighborhoods.

I downloaded this data from San Francisco’s Open Data site here, selecting the Shapefile format in the Export tab. If you do so yourself it’ll give you a zip file with multiple files in there. This is normal with shapefiles, you will have multiple files and only read in the file with the “.shp” extension to R. We still do need all of the files, and st_read() is using them even if not explicitly called. So make sure every file downloaded is in the same working directory as the .shp file. The files from this site had hard-to-read file names, so I relabeled them all as “san_francisco_neighborhoods” though that doesn’t matter once it’s read into R.

As usual when dealing with a new data set, let’s look at the first 6 rows.

In the head() results there was a section about something called “epsg” and “proj4string.” Let’s talk about that specifically since they are important for working with spatial data.

An issue with working with geographic data is that the Earth is not flat. Since the Earth is spherical, there will always be some distortion when trying to plot the data on a flat surface such as a map. To account for this, we need to transform the longitude and latitude values we have to work properly on a map. We do so by “projecting” our data onto the areas of the Earth we want. This is a complex field with lots of work done on it (both abstractly and for R specifically) so this chapter will be an extremely brief overview of the topic and oversimplify some aspects of it.

If we look at the output of st_crs(sf_neighborhoods) we can see that the EPSG is set to 4326 and the proj4string (which tells us the current map projection) is “+proj=longlat +datum=WGS84 +no_defs”. This CRS, WGS84, is a standard CRS and is the one used whenever you use a GPS to find a location. To find the CRS for certain parts of the world see here. If you search that site for “California,” you’ll see that California is broken into 6 zones. The site isn’t that helpful on which zones are which, but some Googling can often find state or region maps with the zones depicted there. We want California zone 3, which has the EPSG code 2227. We’ll use this code to project this data properly.

If we want to get the proj4string for 2227 we can run st_crs(2227). I’m not running it here because it will print out a large amount of text, but you should run it on your own computer. Note the text in text in this output includes “US survey foot.” This means that the units are in feet. Some projections have units in meters so be mindful of this when doing some analysis, such as seeing if a point is within X feet of a certain area. 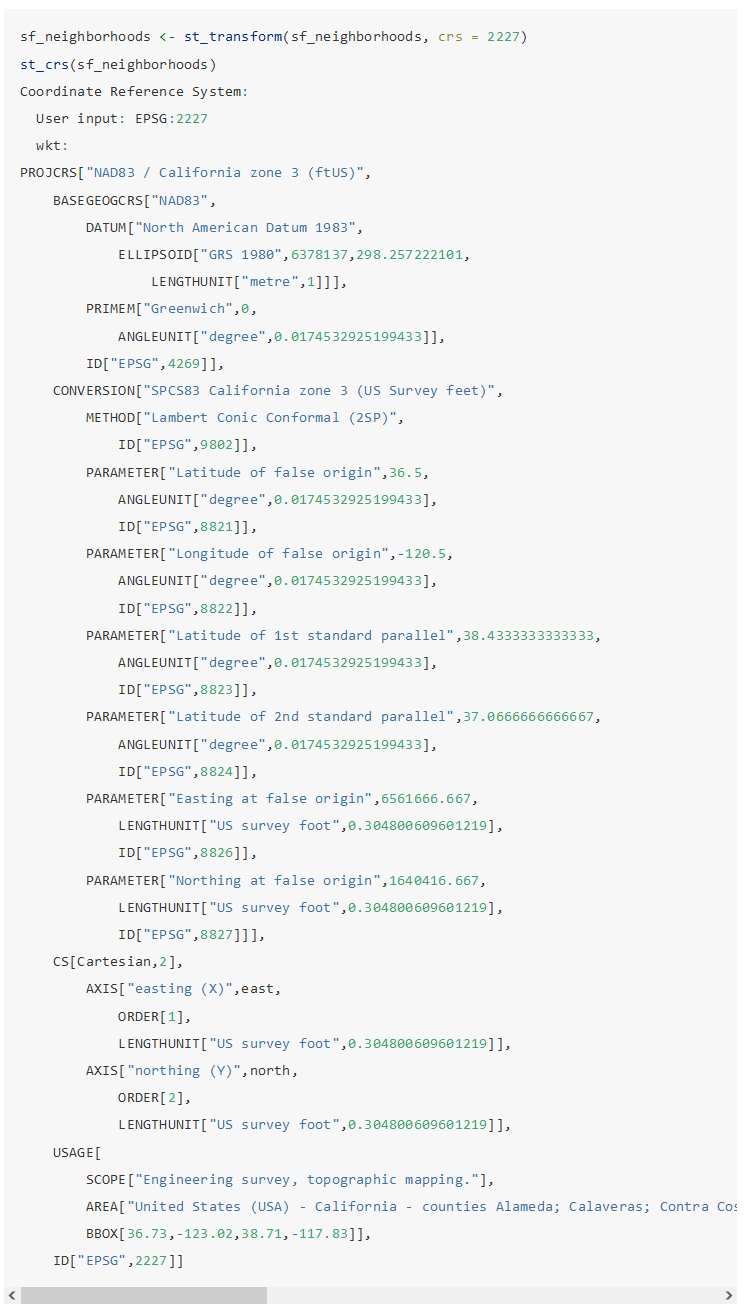 Right now our suicide data is in a data.frame with some info on each suicide and the longitude and latitude of the suicide in separate columns. We want to turn this data.frame into a spatial object to allow us to find which neighborhood each suicide happened in. We can convert it into a spatial object using the st_as_sf() function from sf. Our input is first our data, suicide. Then in the coords parameter we put a vector of the column names so the function knows which columns the longitude and latitude columns are so it can convert those columns to a “geometry” column like we saw in sf_neighborhoods earlier. We’ll set the CRS to be the WGS84 standard we saw earlier, but we will change it to match the CRS that the neighborhood data has.

Now we can take a look at head() to see if it was projected.

We can see it is now a “simple feature collection” with the correct projection. And we can see there is a new column called “geometry” just like in sf_neighborhoods. The type of data in “geometry” is POINT since our data is just a single location instead of a polygon like in the neighborhoods data.

Since we have both the neighborhoods and the suicides data let’s make a quick map to see the data.

We’ll start by finding the neighborhood where each suicide occurred using the function st_join(), which is a function in sf. This does a spatial join and finds the polygon (neighborhood in our case) where each point is located in. Since we will be aggregating the data, let’s call the output of this function suicide_agg. The order in the () is important! For our aggregation we want the output to be at the suicide-level so we start with the suicide data. In the next step we’ll see why this matters.

Let’s look at the first 6 rows.

There is now the nhood column from the neighborhoods data, which says which neighborhood the suicide happened in. Now we can aggregate up to the neighborhood-level using group_by() and summarize() functions from the dplyr package.

We actually don’t have a variable with the number of suicides so we need to make that. We can simply call it number_suicides and give it the value of 1 since each row is only one suicide.

Now we can aggregate the data and assign the results back into suicide_agg.

Let’s check a summary of the number_suicides variable we made.

The minimum is one suicide per neighborhood, 32 on average, and 141 in the neighborhood with the most suicides. So what do we make of this data? Well, there are some data issues that cause problems in these results. Let’s think about the minimum value. Did every single neighborhood in the city have at least one suicide? No. Take a look at the number of rows in this data, keeping in mind there should be one row per neighborhood.

And let’s compare it to the sf_neighborhoods data.

The suicides data is missing 2 neighborhoods (one of the 40 values is missing and is NA, not a real neighborhood). That is because if no suicides occurred there, there would never be a matching row in the data so that neighborhood wouldn’t appear in the suicide data. That’s not going to be a major issue here but is something to keep in mind if this were a real research project.

The data is ready to merge with the sf_neighborhoods data. We’ll introduce a new function that makes merging data simple. This function also comes from the dplyr package.

The function we will use is left_join(), which takes two parameters, the two data sets to join together.

There are two other functions that are similar but differ based on which rows they keep.

We could alternatively use the merge() function, which is built into R, but that function is slower than the dplyr functions and requires us to manually set the matching columns.

We don’t need the spatial data for “suicide_agg” anymore, and it will cause problems with our join if we keep it, so let’s delete the “geometry” column from that data. We can do this by assigning the column the value of NULL.

Now we can do our join.

If we look at summary() again for number_suicides we can see that there are now two rows with NAs. These are the neighborhoods where there were no suicides so they weren’t present in the suicide_agg data.

We need to convert these values to 0. We will use the is.na() function to conditionally find all rows with an NA value in the number_suicides column and use square bracket notation to change the value to 0.

Checking it again we see that the minimum is now 0 and the mean number of suicides decreases a bit to about 31.5 per neighborhood.

Finally we are ready to make some choropleth maps.

For these maps we are going to use ggplot2 again so we need to load it.

ggplot2’s benefit is you can slowly build graphs or maps and improve the graph at every step. Earlier, we used functions such as geom_line() for line graphs and geom_point() for scatter plots. For mapping these polygons we will use geom_sf(), which knows how to handle spatial data.

As usual we will start with ggplot(), inputting our data first. Then inside of aes (the aesthetics of the graph/map) we use a new parameter fill. In fill we will put in the number_suicides column, and it will color the polygons (neighborhoods) based on values in that column. Then we can add the geom_sf().

We can use scale_fill_gradient() to set the colors to what we want. We input a color for low value and a color for high value, and it’ll make the map shade by those colors.

This gives a much better map and clearly shows the areas where suicides are most common and where there were no suicides.

To make this map easier to read and look better, let’s add a title to the map and to the legend.

Since the coordinates don’t add anything to the map, let’s get rid of them.

So what should we take away from this map? There are more suicides in the downtown area than any other place in the city. Does this mean that people are more likely to kill themselves there than elsewhere? Not necessarily. A major mistake people make when making a choropleth map (or really any type of map) is accidentally making a population map. The darker shaded parts of our map are also where a lot of people live. So if there are more people, it is reasonable that there would be more suicides (or crimes, etc.). What we’d really want to do is make a rate per some population (usually per 100k though this assumes equal risk for every person in the city which isn’t really correct) to control for population differences.

We’ll use this data in Chapter 18 to make interactive choropleth maps so let’s save it.